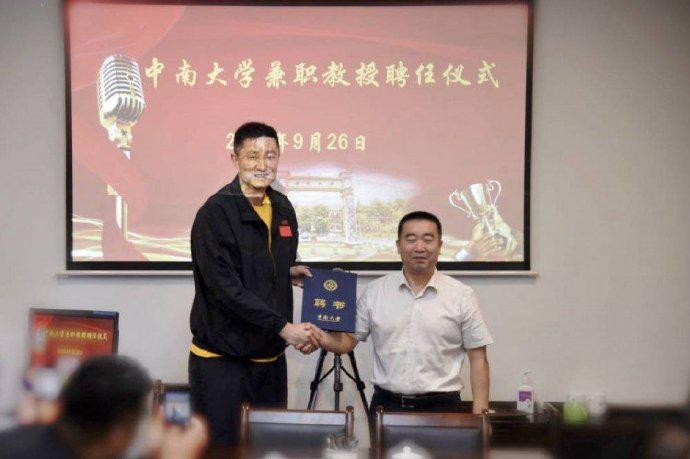 On the morning of September 26, the school held a part-time professor appointment ceremony in the conference room of the school's main office. Du Feng, the head coach of the Chinese men's basketball team, was appointed as part-time professor of our school. School leaders Hu Yuehua and Li Jingsheng attended the appointment ceremony. The responsible comrades of the school office, personnel office, physical education and research department and other departments participated in the activity.

Hu Yuehua, on behalf of the school, extended a warm welcome to Du Feng's appointment as an adjunct professor in the Department of Physical Education and Research, and expressed his gratitude to Du Feng for his long-term attention and support to the development of the sports cause of Central South University. Hu Yuehua pointed out that as an athlete, Coach Du Feng has rich practical experience, outstanding achievements, and has repeatedly won glory for the country; as a coach, he has strong teaching and research capabilities and has led the team to win many championships. Hu Yuehua recalled the development history of sports at Central South University. He said that Central South University attaches great importance to sports work, fully implements General Secretary Jin Ping’s important instructions on strengthening sports work, and deepens the reform of sports teaching. Sports competitions are very competitive in universities across the country. strength. Hu Yuehua said that we will create conditions for Professor Du Feng to carry out work in the school, and hope that with the guidance and help of Professor Du Feng, our school's basketball career will better develop in a faster, stronger and higher direction.

Du Feng thanked the school for its trust. He said that Central South University is a strong university. The development of the school’s sports career has exceeded his imagination. The competitive strength of the “three major balls” of basketball, football, and volleyball has maintained a high level among colleges and universities across the country. The men’s basketball team has advanced for five consecutive years. National top four, three runner-ups, as well as track and field, swimming, table tennis, dragon and lion dance and other projects also have outstanding results. I am very happy to be a part-time professor of Central South University, and I am willing to make special basketball for the development of Central South University's sports career. Contribute to project development.

After the appointment ceremony, Du Feng went to the school gymnasium to give on-site guidance for the team training and interact with men's basketball fans.